Starting in 2017, some very special Western Snowy Plovers were uniquely marked with green alphanumeric flags. They were part of a pilot study using these types of markers on plovers on the Pacific Coast. The markers are relatively easy to read and photograph by observers, and for researchers, the markers add hundreds of new combinations so that we can continue to uniquely band these birds.

For the first step, we teamed up with SeaWorld and the Navy; rescued plover eggs (orphaned or at risk of loss) can be captive-reared, and fledglings can be released back near natal sites where they may be safe. As birds in captivity are under ever-watchful eyes, this provided an opportunity to check on chicks even more , as we the use of our flags. Four chicks of varying ages were released back on beaches at Naval Base Coronado as , near where eggs had been rescued, and all four (flagged A1 to A4) continued to be seen over the fall and winter. Some birds disperse over large distances… but resightings continued in 2018! To add to our excitement, Plover A3, now a grown-up female, nested this 2018 season at one of our sites in northern San Diego County, at Marine Corps Base Camp Pendleton!

In 2018, we continue our flag trials, now in the field. Visit us again soon for updates! Your reported bands and photos (link here) will help us track plovers better. Thank you! 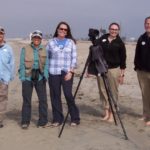